MANILA, Philippines - Living up to pre-pageant predictions of making it to the Top 5, Ariella Arida held her own against the Latina beauties she faced in the final round of the Miss Universe beauty pageant held at the Crocus City Hall in Moscow, Russia Saturday night (Sunday morning, Manila time).
Arida finished 3rd runner-up to Miss Ecuador Constanza Baez who placed 2nd runner-up, Miss Spain Patricia Rodriguez who placed 1st runner-up and Miss Venezuela Gabriela Isler who won the 8th Miss Universe title for her country. Miss Brazil Jakylene Oliveira finished 4th runner-up.
Although Arida’s finish did not exactly live up to the high expectations she had to live up with after successive runner-up finishes for the Philippines in the last three years, making it as far as 3rd runner-up is a major achievement for the 24-year old morena charmer from Alaminos, Laguna.
Arida’s Miss Universe journey is not without its own share of adversities—from her controversial interview that cited Latinas as examples of contestants who can’t speak English that was taken out of context by certain quarters to her less than stellar performances in the National Costume and the preliminary evening gown competitions.
Despite those setbacks, Arida remained a strong contender for the title until the very end, figuring prominently not only in fearless forecasts but also in betting odds posted online. Prior to the big night, she won the pre-pageant honors for Ice Princess for a winter-themed glam photo shoot. Her video for the pageant’s official “Truth and Dare” series had the most views on YouTube and was the only one to reach the 300,000 mark out of the 86 contestants.
Her momentum continued to be on the upward swing during the actual pageant. Arida drew some of the loudest cheers in the venue each time she advanced to the next round. She topped the online voting that automatically won her a slot among the 16 semi-finalists but was the last to be announced to the relief of her fans. The other semifinalists were candidates from Costa Rica, Ukraine, China, Ecuador, Great Britain, Indonesia, Venezuela, Dominican Republic, Puerto Rico, Spain, USA, Nicaragua, Switzerland, India and Brazil.
Trimmed down to 10, she again made it to the next round along with Ukraine, Ecuador, Great Britain, Venezuela, Dominican Republic, Spain, USA, India and Brazil.
Contrary to the fears of many, Arida also did very well during the Question and Answer portion, she drew the name of Russian judge Anne Vyalitsina who asked her, “What can be done about the lack of jobs for young people starting their careers around the world?”
As she promised prior to arriving in Moscow, Arida did not use a translator to deliver her answer: “We should invest in education. That is my primary advocacy. Through it we can land good careers in the future. Education is the ticket to a good future.”
A Chemistry major who graduated with honors from the University of the Philippines in Los Baños, Arida’s competitive spirit allowed her to represent her country admirably in the prestigious international beauty pageant.

InterAksyon.com
The online news portal of TV5
TACLOBAN CITY – (UPDATE, 10:20 a.m.) A regional police chief on Sunday said super typhoon Yolanda is believed to have killed 10,000 people in Leyte, but official death toll by the National Disaster Risk Reduction and Management Council (NDRRMC) has been placed at 151.
"We had a meeting last night with the governor and based on the government's estimates, initially there are 10,000 casualties (dead)," Chief Supt Elmer Soria told reporters in Tacloban, the devastated capital of Leyte province.
Soria was referring to a meeting with the governor of Leyte.
NDRRMC spokesman Major Reynaldo Balido also said at least five people were reported missing in the wake of the typhoon, dubbed as the world’s strongest for the year.
"Many of the additional fatalities came from Calabarzon, Mimaropa, and Western Visayas," he said.
Balido also noted many more could be missing but not yet reported as communication lines were still down in the affected provinces.
Yolanda on Friday ripped through parts of the country on Friday before leaving the Philippines on Saturday.
The NDRRMC's 6:00 a.m. update said that aside from the 151 dead and five missing, 23 were injured.
Almost a million families affected
It added "Yolanda" had affected 982,252 families or 4,459,468 people in 1,741 villages in 343 towns and 39 cities in 36 provinces. A total of 86,513 families or 403,503 people are staying in 1,425 evacuation centers.
The report said 2,071 houses were destroyed while 1,409 were damaged.
It added 18 roads and one bridge were affected in Southern Luzon, Bicol and Eastern Visayas.
Damage was estimated at P7,215,831.75, including P4.88 million in infrastructure and P2,335,831.75 in agriculture.
Power and communication restoration work is still ongoing in parts of Southern Luzon, Bicol, Visayas, and Caraga region.


HongKong wants to Ban all Philippine Products, Air flights, No-Visa Access except Maids –could paralyze them 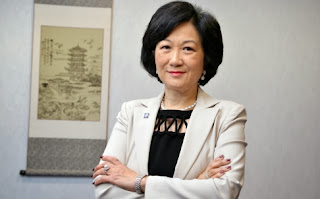 Regina Ip Lau Suk-yee. Photo: South China Morning Post (Hong Kong)
Legco set to back call to withdraw visa-free access to Filipino visitors
Hong Kong Lawmakers ready to put pressure on Manila despite fresh hope of compensation deal
Hong Kong Lawmakers are rallying behind a call to withdraw visa-free access for Philippine visitors to Hong Kong despite reports of progress towards a compensation deal for victims of the 2010 Manila hostage siege.
A non-binding Legislative Council motion urging the suspension of the visa-free scheme looks set to be passed on Wednesday (November 7, 2013) after parties from across the political spectrum (Pro Communist and pro Democrats) indicated they would support it.
Hong Kong Lawmakers want the government to put pressure on the Philippine leadership and Manila city government to compensate families of eight Hongkongers killed by sacked policeman Rolando Mendoza, as well as the injured.
The call comes despite a joint statement on Thursday by Manila City Council representative Bernardito Ang and Democratic Party lawmaker James To Kun-sun, who is working with the victims and families, indicating that a deal was getting closer.
Former security chief Regina Ip Lau Suk-yee, will move the call to stop visa-free access as an amendment to radical pan-democrat Albert Chan Wai-yip's motion seeking sanctions on the Philippines. She has won the support of two leading Beijing-loyalist parties, the Democratic Alliance for the Betterment and Progress of Hong Kong and the Federation of Trade Unions. Pan-democrats are also expected to support her amendment.
Chan's motion is expected to pass. But DAB chairman Tam Yiu-chung says his party may not support an amendment by Democratic Party lawmaker Sin Chung-kai as it "might infringe the existing trade agreements".
Sin wants the government to stop buying Philippine products, halt negotiations on air routes and trade and urge the public to boycott Philippine goods but the Hong Kong Employer's association opposed of banning the maids as it could paralyze them
But FTU lawmaker Wong Kwok-kin will support both amendments.
"Though the motion has no binding effect, it will exert pressure not only on the Hong Kong government but also the Philippines - as pan-democrats and the pro-establishment camp join forces on this issue," he said.
Security minister Lai Tung-kwok would not comment on the amendments until the meeting. - SCMP

Posted by SAE SINGAPORE ALUMNI at 5:11 PM No comments: